This is where you’ll find resources concerning the exhibition “The Art Market under the Occupation, 1940-1944” to help you deepen your knowledge about the subject.

On Tuesday, March 19, 2019, Minister of Culture Franck Riester opened “The Art Market under the Occupation, 1940-1944” exhibition and toured the show with curator and art historian Emmanuelle Polack. 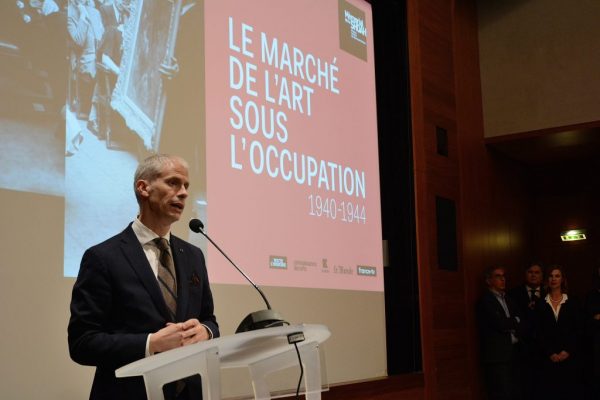 Background: economic “Aryanization” and the spoliation of Jews in Europe

As early as 1933, the nazi regime began implementing a policy to exclude Jews from the economy. Boycotts of Jewish-owned businesses and wildcat expropriations spread until a legal framework aiming to dispossess “Jewish entreprises” could be drawn up. During the war, this policy was exported to the occupied countries and adopted by the Reich’s allies.

The French State integrated these ideas into its anti-Semitic policy called economic “Aryanization”, which aimed to systematically spoliate Jewish-owned businesses, shops and property across the country in order to “eliminate all Jewish influence in the national economy” (law of July 22, 1941).

Throughout Europe, including France, spoliation was a key component in the process of excluding Jews from society, paving the way for the subsequent implementation of the “final solution of the Jewish question”. The systematic spoliation of businesses, shops and property belonging to Jews began across France in 1941. They and their property were identified before “Aryanization” took place by sale or liquidation. This was an efficient administrative process based on a legal arsenal involving the collaboration of not only many government agencies, but also broad swaths of society.

The importance of this policy has long been overshadowed by the mass murder that it facilitated in many ways. In the 1990s, a rising number of researchers became interested in the subject in universities or commissions. The “Matteoli mission” was set up to answer increasingly important questions about the fate of property belonging to the victims of the “Final Solution”.

The looting of cultural property

It is important to carefully define what is meant by the term “cultural property”: art works (paintings, sculptures, drawings), books, manuscripts, collections of valuable objects, musical instruments, scores and anything constituting cultural heritage.

At the start of the Occupation, the Germans requisitioned apartments of Jewish families and stored the property they found in them before sending it to Germany. Under the authority of Alfred Rosenberg, who in 1940 was put in charge of confiscating art works and libraries stolen from Jews through the Einsatzstab Reichsleiter Rosenberg (ERR), books, archives and art collections were looted without the consent of French officials.

After the war, Rose Valland was essential in helping to recover thousands of works that had been sent to Germany. From 1944-1949, the Commission de récupération artistique (Commission for the Recovery of Works of Art) helped owners find 45,000 works. Some 2,000 were entrusted for safekeeping to the musées nationaux de récupération (National Museums of Recovery, MNR) and 14,000 sold by the Administration des Domaines (Probate Office). The works entrusted to the MNR are still in the Louvre, the Georges Pompidou Centre and regional museums. Most have never been claimed because many heirs are unaware that their family was spoliated.

Created in 1999, the Commission pour l’indemnisation des victimes de spoliations (Commission for the Compensation of the Victims of Spoliation, CIVS) is attached to the Prime Minister’s office. Its goal is to inform Jewish victims and their heirs about the fate of property spoliated during the Occupation by either the Germans or Vichy officials and to offer compensation on a case-by-case basis (looting of furniture and professional equipment, liquidations of businesses and shops placed under provisional administration, confiscation of jewelry and valuable objects, spoliation of art works, bank accounts and financial assets).

provenance searches are inseparable from the field of art history. Art historians trace the chain of transmission of a work’s successive owners from the time of its creation to the present. Their sources include catalogues raisonnés, auction catalogues, gallery archives, public archives (auction houses, museums) and databases.

Spoliated art has been the main focus of provenance searches since the mid-1990s. Purchases made on the art market between 1933 and 1945 in Nazi Germany and annexed or occupied countries must have a clear provenance. If any information about a cultural object’s owners’ is missing, the acquisition could be dubious and raise questions about possible spoliation.

A room in the exhibition will be devoted to provenance searches. Two Sundays a month, Emmanuelle Polack, the exhibition’s curator, will help families who have claimed works or been the victims of wartime looting and spoliation to gather information (by appointment only).

To make an appointment, e-mail Ms. Polack at provenance@memorialdelashoah.org.

Do you have any idea how many works were spoliated from Jewish families and transferred to Germany between 1940 and 1944?

In all, of 100,000 works and art objects moved from France to Germany during the Occupation, 60,000 were recovered immediately after the war. Between 1945 and 1950, 45,000 were restituted to their owners or their heirs, 13,000 sold by the Ministry of Finance’s Probate Office and 2,000 entrusted to French museums for safekeeping. By a decree dated 30 September 1949, these works are not listed in the national museums’ inventories. They do not belong to the State but are in its provisional custody.

Are any Jewish families still looking for works that were spoliated from them during the war? If so, what can they do?

The lack of a database in France accurately listing cultural property spoliated from Jewish families leads me to answer in the affirmative. Families are still actively looking for libraries, art collections or musical instruments. To try and recover them, they can seek private-sector assistance from lawyers and genealogists. As for the public sector, in his July 22, 2018 speech commemorating Vel’ d’Hiv’ Prime Minister Edouard Philippe announced the creation of an agency and the strengthening of ministry of Culture services devoted to restituting spoliated cultural property to Jewish families, which was one of the Matteoli Commission’s recommendations.

Do you think it makes any sense to restitute Jewish property spoliated during the Second World War 75 years after the fact?

The restitution of Jewish property is more than just a matter of accounting or putting a monetary value on a work. Any means necessary will be taken to determine who owned a work or a cultural object in order to right a wrong: legalized theft by economic Aryanization, whether at the hands of Germany or Vichy. Restitution is an act of empathy and solidarity with the families of victims of racial persecution. Real closure can be achieved only if it includes recognition of the atrocities committed during the Second World War. Restitution can claim universality only if a spirit of justice and humanity prevails in the work of remembering. We must find a just, fair solution, such as the one recommended by the 1998 Washington agreement.

On the Art Front: French Collections during the Second World War by Emmanuelle Polack.

Think about browsing the Shoah Memorial’s online bookshop or asking for books the next time you visit us. Our staff will be happy to give you information and order any books you might be looking for.

The exhibition catalogue (in french) is available at our online bookshop :

The Art Market under the Occupation: 1940-1944, Emmanuelle Polack, ed. Tallandier

The prime minister’s March 25, 1997 decree set up the Mission d’étude sur la spoliation des Juifs de France (Fact-finding Mission on the Spoliation of the Jews of France), also known as the Matteoli Mission after the name of its chairman. You can read it in french here :