We invite you to discover the main lines of the exhibition « The art market under the Occupation, 1940-1944 » as some documents or visuals that will be presented in the exhibition at the Shoah Memorial. 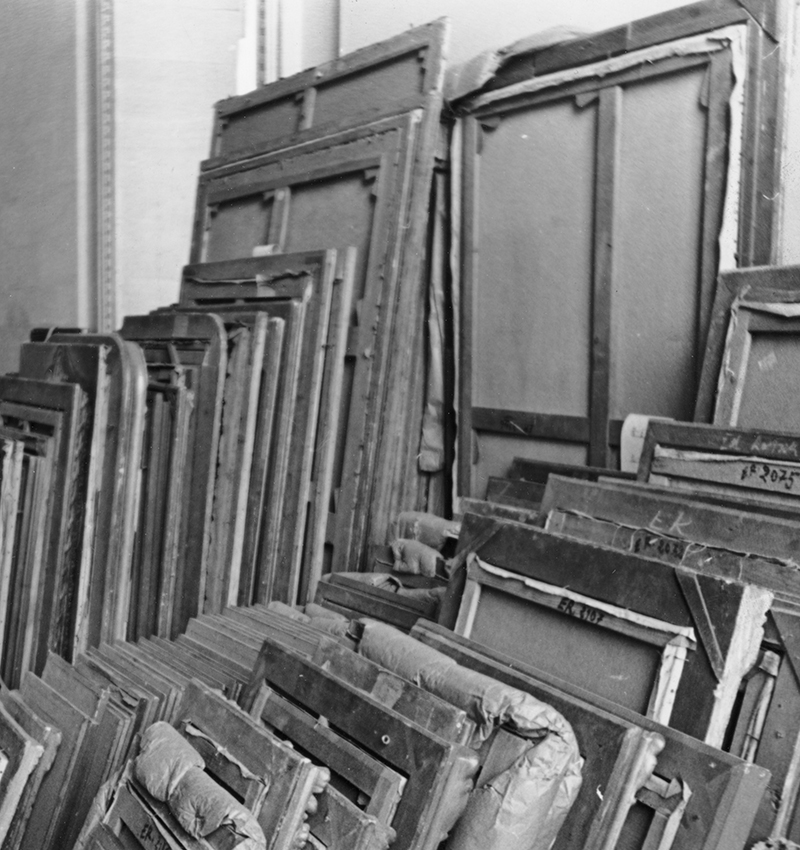 In the summer of 1941, the French government began confiscating businesses, real estate, financial assets and art works from Jews across the country. Their bank accounts were frozen. Arrested Jews had their belongings confiscated as they entered French internment camps.

Victims of both Nazi and Vichy laws, the Jews of France were stripped of their property and excluded from every sphere of political, social and economic life—a prelude to their physical elimination. Plunder and spoliation contributed to weakening and marginalizing them. Deprived of the means and resources that would have allowed them to flee, thousands were arrested, interned and deported.

Meanwhile, France’s art market was thriving. Excitement swept through all the places where art works are sold: studios, galleries and auction houses. Everybody came to Paris to snatch them up. Over two million items changed hands between 1941 and 1942. Selling, trafficking and trading in art works, which sometimes reached very high prices, had consequences on the fate of works owned by Jewish families persecuted under German ordinances and Vichy’s decrees. Discriminatory laws also targeted Jewish art dealers, whose shops or galleries were “aryanized”.

Looting art works was an integral part of Nazi ideology. From the Nazi perspective, “Aryan” art had to replace modern, “degenerate” art, stigmatized as ”Jewish art”. Art works, especially those owned by Jews, were looted from occupied countries not only for financial gain but also to impose the Nazis’ ideological and racial outlook. Hitler himself paved the way by ordering that art works, documents and valuables, “especially those owned by Jews”, be confiscated for “safekeeping” to be used as “a bargaining chip in peace talks”.

In Occupied Paris, the Germans seized the most famous collections of Jewish art dealers and collectors for “safekeeping”, first in the German Embassy’s cellars, then in three to six rooms at the Louvre and finally at the Jeu de Paume museum.

The B. Weill Gallery

Berthe Weill (1865-1951), one of the first female gallery owners, was an art dealer for 40 years. In 1901 she opened the B. Weill gallery at 25 rue Victor Massé (Paris, 9th arrondissement) and immediately took the lead in spotting new talent. She was the first to exhibit Picasso’s works in France and held the only Modigliani show during his lifetime, when her gallery was temporarily shut down on grounds of moral indecency for displaying female nudes. Weill never became wealthy. Targeted by anti-Semitic attacks in the press, in 1943 Le Cahier jaune wrote that she had “the Jewish race’s total lack of aesthetics.” During the Occupation, she asked a friend to take over her gallery to keep it from falling into the hands of an Aryan administrator.

Another trailblazer, Pierre Loeb (1897-1964) showed works by avant-garde artists, including Miro, Picasso, Matisse, Giacometti and Antonin Artaud, at his gallery in the 5th arrondissement of Paris. In 1941, when he had to transfer ownership of the gallery to an Aryan art dealer in compliance with the law, Loeb made an arrangement with a colleague, Georges Aubry. In January 1942, he and his family left France for Havana. After returning to Paris, Aubry was reluctant to honor their gentlemen’s agreement. Picasso had to step in to change his mind. In compliance with the April 21, 1945 ordinance on the restitution of spoliated property, Loeb’s gallery was returned to him in July 1945.

By 1908, Paul Rosenberg (1881-1959) had become one of France’s foremost avant-garde art dealers. His gallery, at 21 rue La Boétie (Paris, 8th arrondissement), featured works by Cubists as well as classical masters. On the eve of war, it was at its peak. In addition to a host of other artists, Rosenberg had two 20th-century masters under contract: Henri Matisse and Pablo Picasso.

On June 17, 1940, Rosenberg and his family left France after depositing 162 paintings in a bank safe in Libourne. On April 28, 1941 the occupying authorities broke open the safe, shipping most of the spoliated works to the Jeu de Paume museum in Paris. The Institute for the Study of Jewish Questions (IEQJ), an anti-Semitic propaganda organ, requisitioned the gallery on May 11, 1941.

Rosenberg fled to the United States, where he continued to sell paintings. After the Liberation of Paris, he went looking for the works spoliated from his collection. Around 50 remain missing to this day.

René Gimpel (1881-1945) defined himself first as an art collector, then a dealer in objets d’art and paintings, especially by the Impressionists. He was active in Paris, London and New York. Realizing which way the wind was blowing, Gimpel closed his Place Vendôme gallery in 1939 and left Paris with his family in July 1940. He joined the Resistance in Marseille while trying to continue working as an art dealer from Cannes or Monte Carlo, where he lived. In 1942, a Kriegsmarine detachment took away “eighty-one crates containing various items, paintings, furniture, sculptures, etc. owned by René Gimpel that were to be sent to Monte Carlo” during a raid on his premises on boulevard Garibaldi in Paris. Gimpel was arrested in September 1942, interned in the Saint-Sulpice-la-Pointe camp (Tarn) and deported on July 2, 1944 to Neuengamme concentration camp in northern Germany, where he died on January 3, 1945.

the Hôtel Drouot (11th arrondissement) is the leading furniture auction house in paris. At a time of severe hardship, when everything was in short supply, people came to Drouot to sell whatever they could, especially paintings: art was considered a safe bet in this dark period. An influx of goods, including art works spoliated from Jewish families, fueled a thriving market. From July 17, 1941, Drouot complied with prefecture of police directives barring Jews from auction rooms.

The art market’s counterpart on the French Riviera (unoccupied zone)

The aryanization of Jewish property in the occupied zone, ordered by decree in the autumn of 1940, also applied to the free zone. The circumstances around auctions under the Vichy regime on the French Riviera, especially in Nice, allow the ramifications of an organized market to be observed.

In the exhibition you can learn about the auction of “a Parisian art lover’s collection” at the Savoy-Palace in Nice in June 1942.

In the immediate post-war period, the French protagonists of the art market, whose suspicious practices flourished during the dark years, are little or not worried. Only a handful of them have to answer for their misdeeds and exceptional profits from operations carried out with the enemy. Seeking to exculpate themselves, some professionals in the art market do not hesitate to adopt positions diametrically opposite to those that were theirs during the war.

The history of the art market under the Occupation has long been struck by a form of amnesia, yet it crosses the history of looting, aryanization and spoliations perpetrated by the Nazis on the artistic heritage of Jewish families of France.

On the occasion of the commemoration of the Vél’d’Hiv roundup on July 22, 2018, Prime Minister Édouard Philippe announced the State’s commitment to the victims of anti-Semitic spoliations.